Hej was the main project from the 6th-semester Interaction Design. In Hej, we dealt with the topic of the attention economy. We wanted to create a concept that addresses the emerging problems of the attention-demanding products of the current generation. In the process, we discovered that chats are problem makers. Therefore, we iterated alternative concepts and ideas to avoid problems like FOMO or stress. This is how we came up with the concept of the app 'Hej' an alternative social hub.

In 1998, Georg Franck published his book entitled "The Economy of Attention". He sees the economy of attention as existing in parallel to the economy of money and values attention as an important component of social cohesion. According to him, the different types of attention capital are prestige, reputation, prominence, and glory. In the example of advertising, good publicity that has a lot of reaches and makes an impression is transformed into money for the agencies. In politics, the currency of attention is one of the essential elements for a successful election campaign. Attention is a commodity that is fought for everywhere. Our technical devices also demand this attention. They want to urge you to use the app, point things out and ask you to use them. This rush of information masses is driven by the increasing number of channels and causes noise. 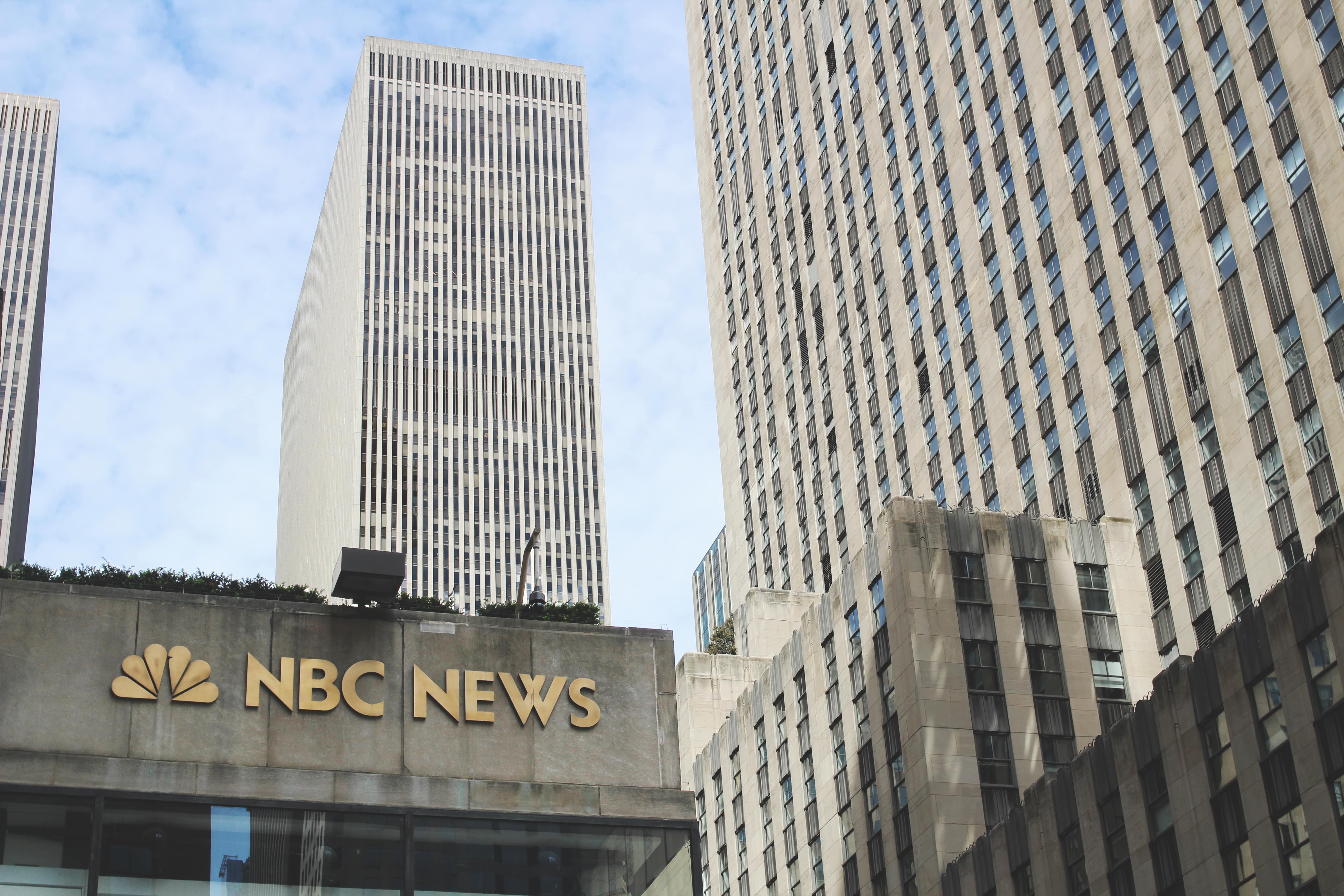 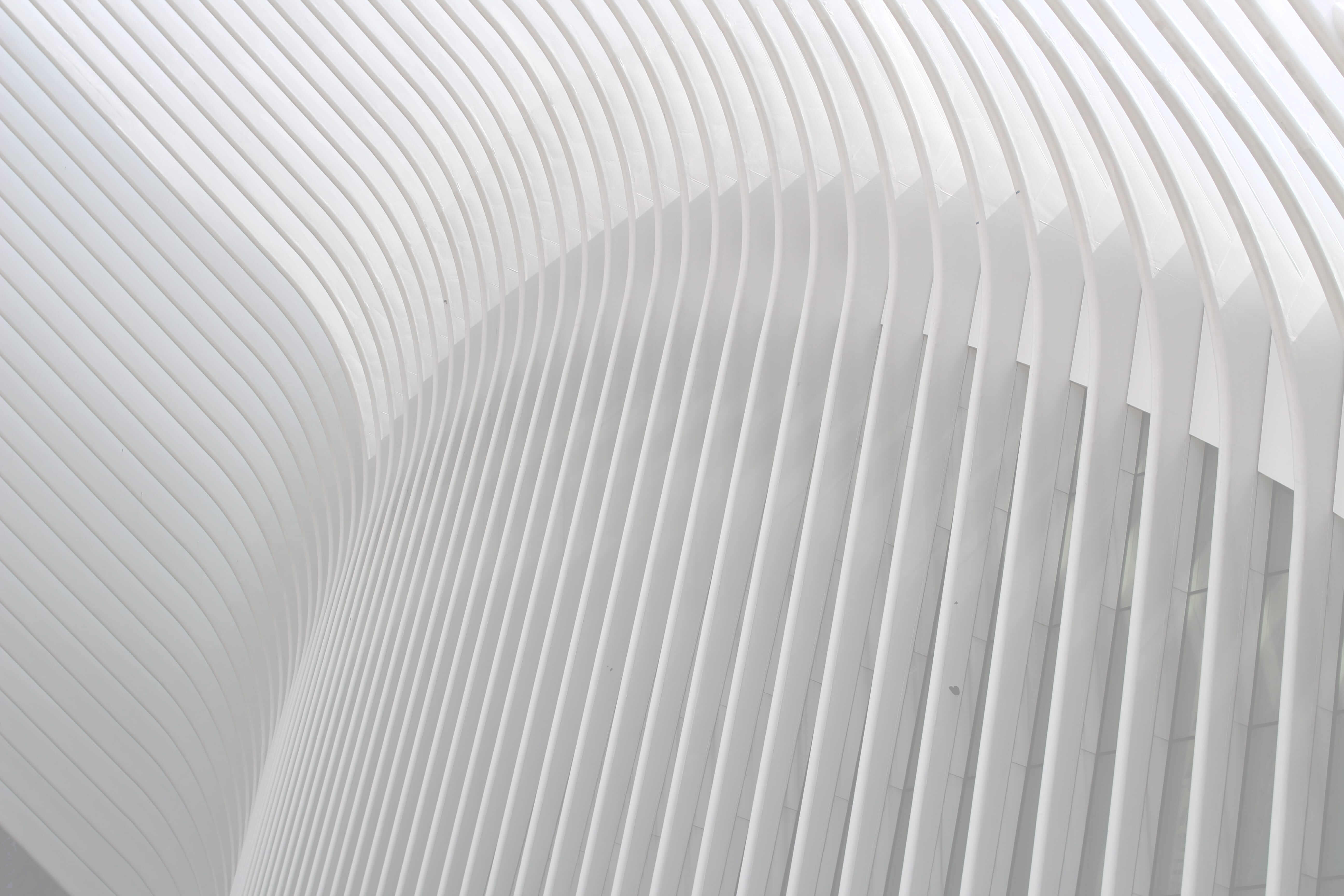 Calm Technology was defined by Mark Weiser, John Seely Brown, and Rich Gold in 1995 at the Xerox subsidiary "PARC". Their motivation was the constantly increasing amount of information and increasingly complex computers. Weiser believed that this would lead to an era of 'quiet technology' where technology would not replace us in a panic but would help us focus on the things that really mattered to us. Amber Case embraced this philosophy and wrote the book 'Calm technology' as a result. With it, she also described the methodology for 'inclusive design' for Microsoft. The methodology describes how to create accessible and, above all, people-friendly interfaces and products that support everyday life and make as little frustration and stress as possible. We have used these guidelines as a starting point in our project. 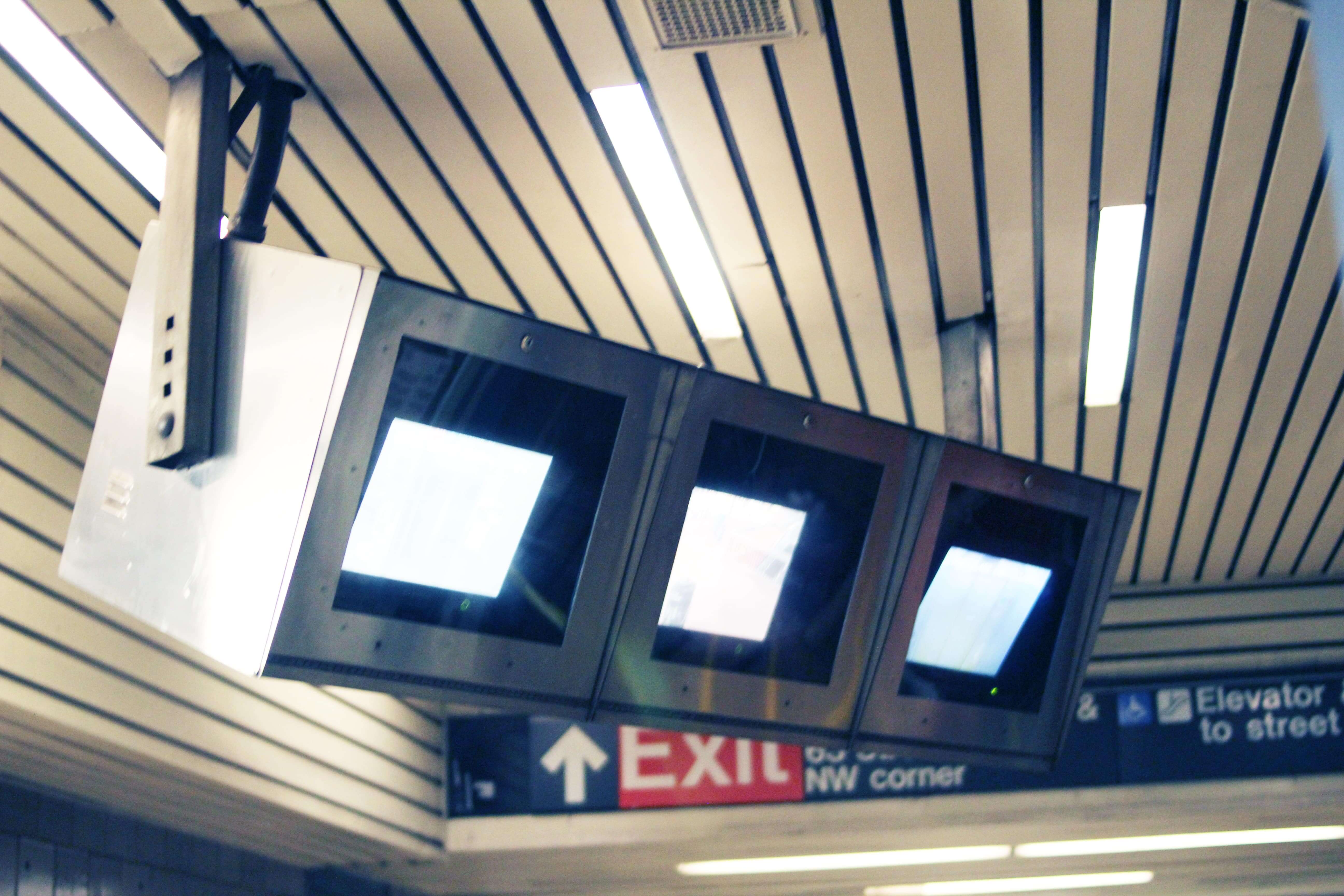 In this project, it was essential to test many assumptions. We gathered insights through many interviews, but these were very emotionally charged and very different from the respective participants. Therefore, we tested and validated each assumption. In the process, we also came up with new insights, which we included in our application. 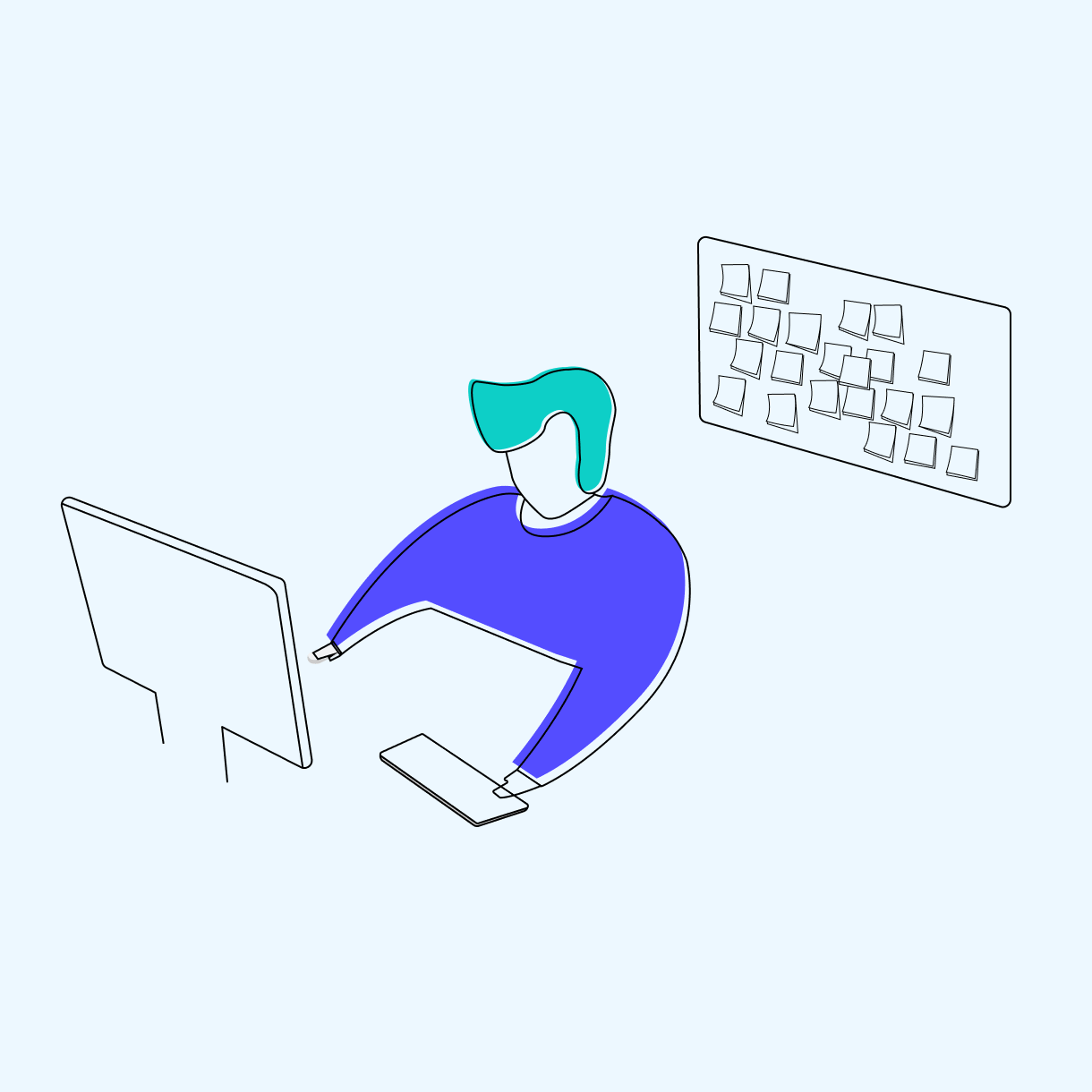 The user should be given the opportunity to decide for himself when he communicates with whom. The user's attention should only be gained at the essential moments. 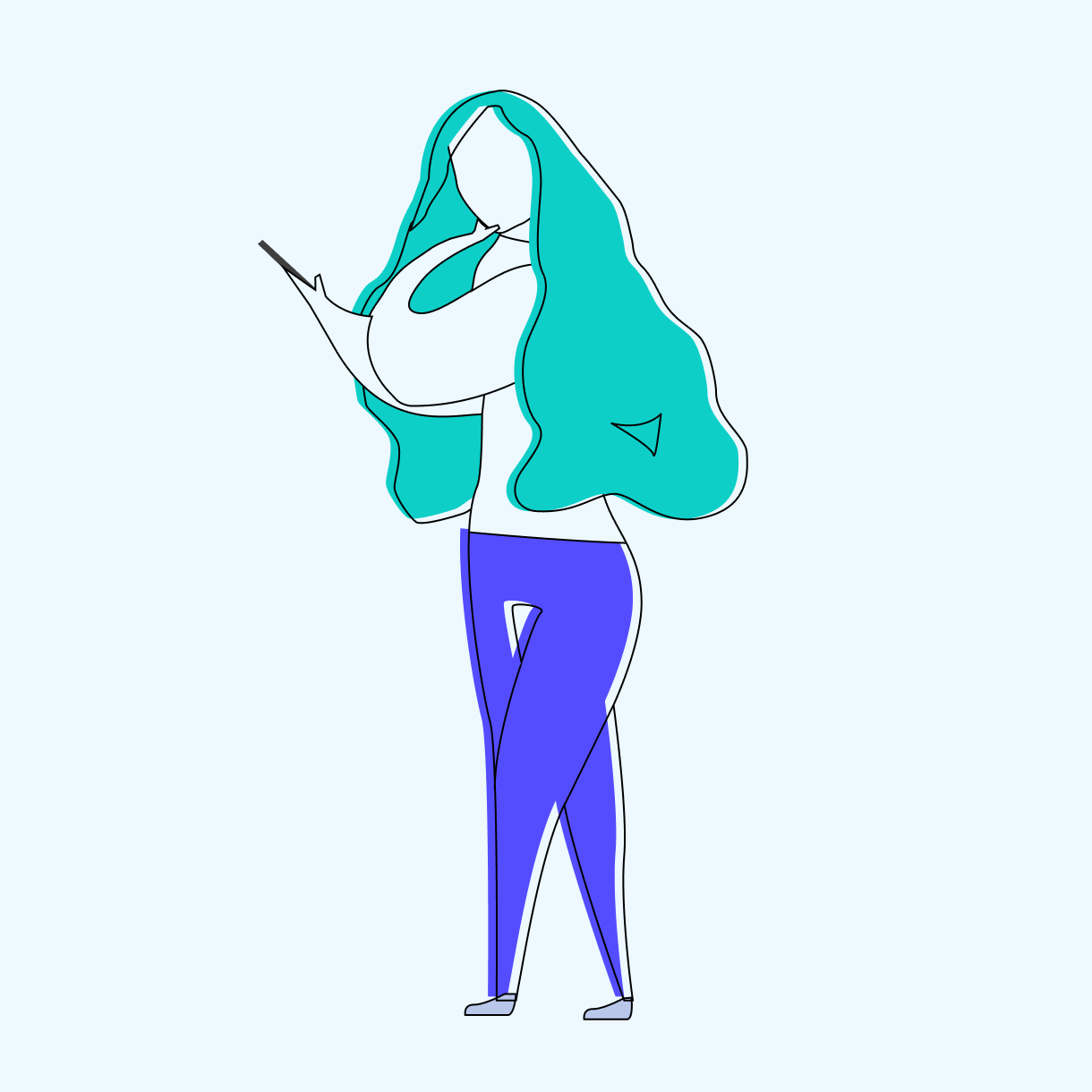 Chats can become overwhelming after a long absence. To not miss important content, the system must make it easier for the user to keep up to date. 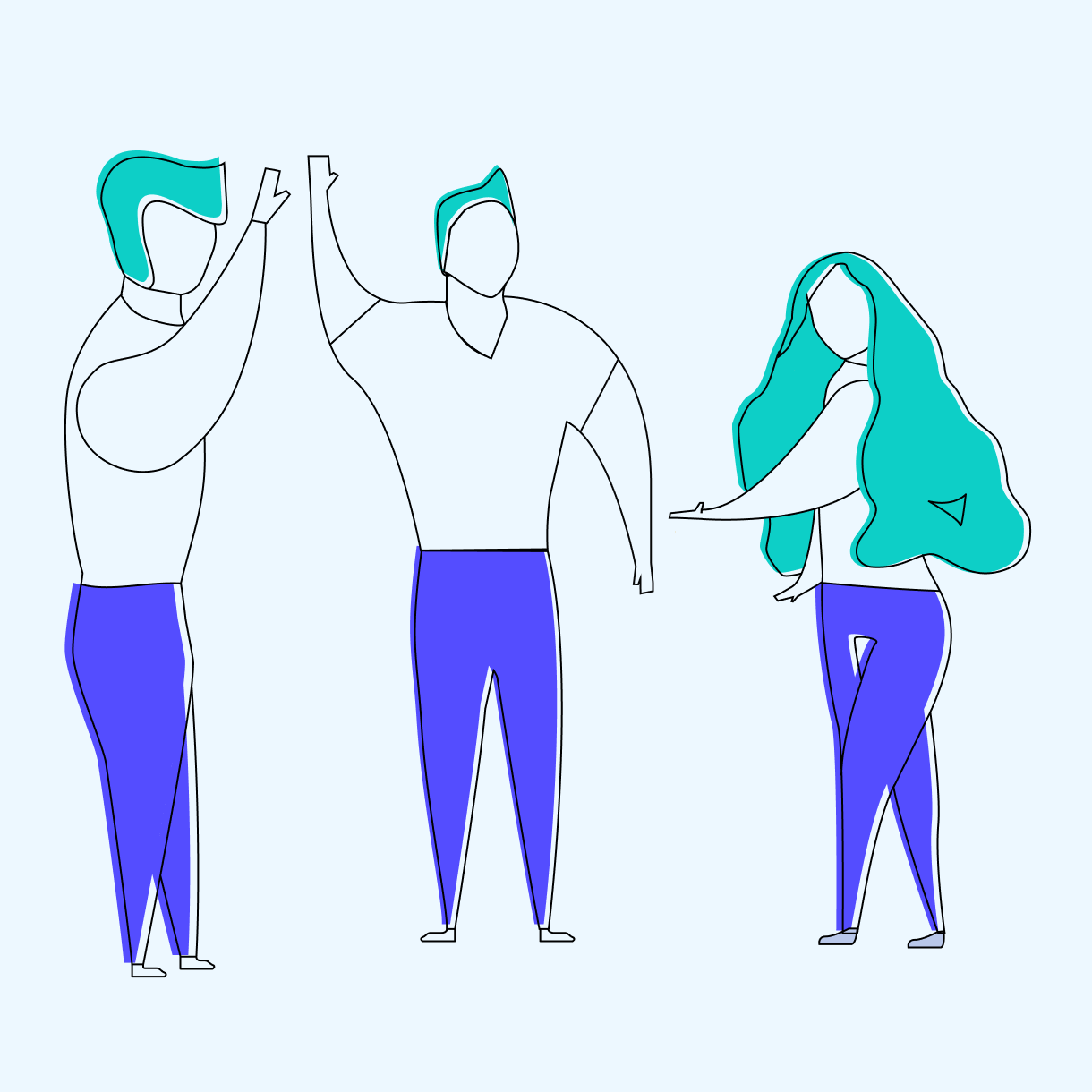 Despite new rules and tools, the app should not create barriers and instead give users more opportunities to communicate better with their fellow human beings.

It is a social hub/communication tool that tries to solve emerging problems caused by current communication channels. It is like the chats we know, but much more adaptable in terms of communication and stress. However, it is geared towards direct exchange with your own contacts. This means that the messages are goal-oriented and less attention-oriented. Everything takes place in your own closer cosmos with the contacts you really want to interact with. The focus of the application is not to restrict the user but to give him more tools to communicate smarter and be less stressed. We want to give the user the freedom to express the way he or she wants. 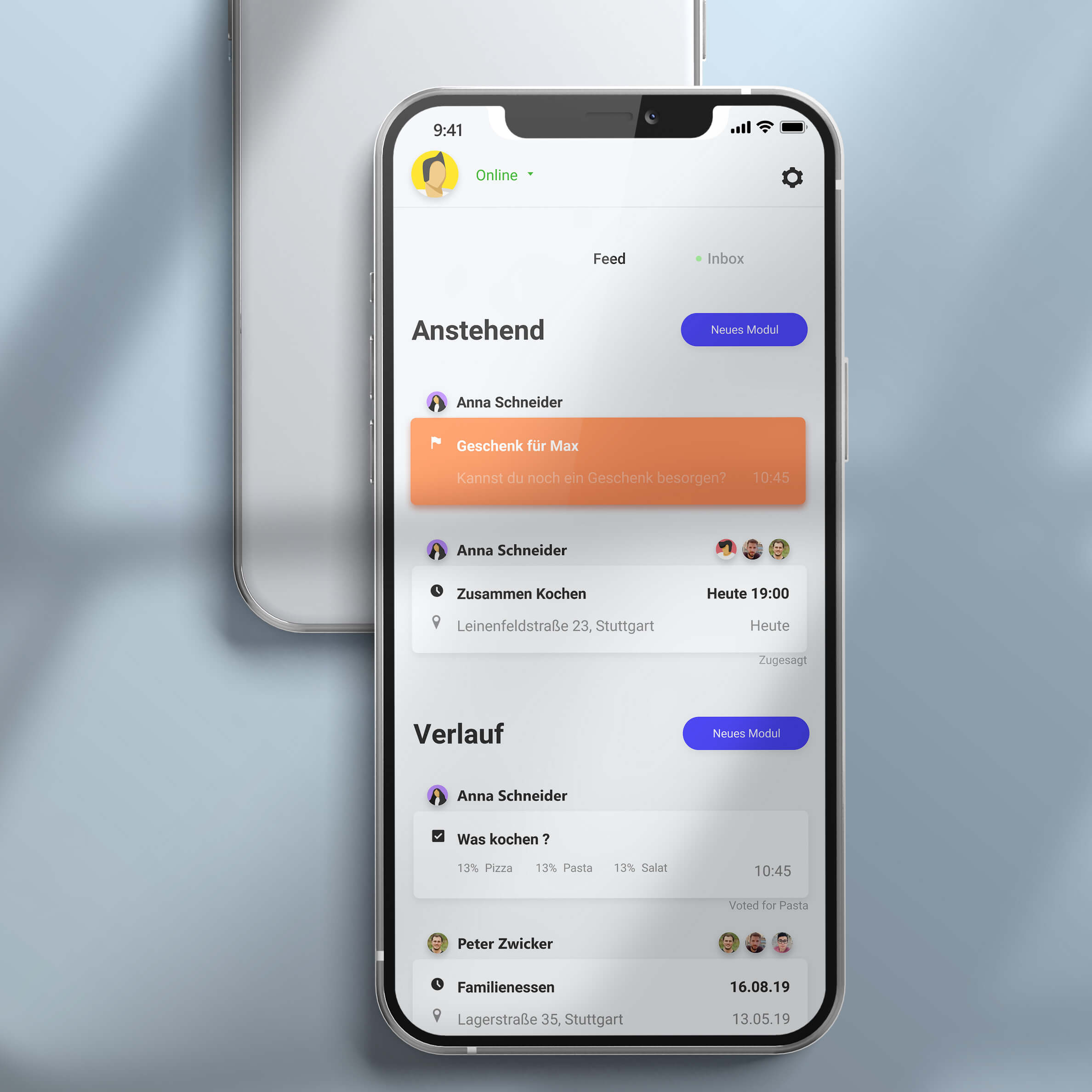 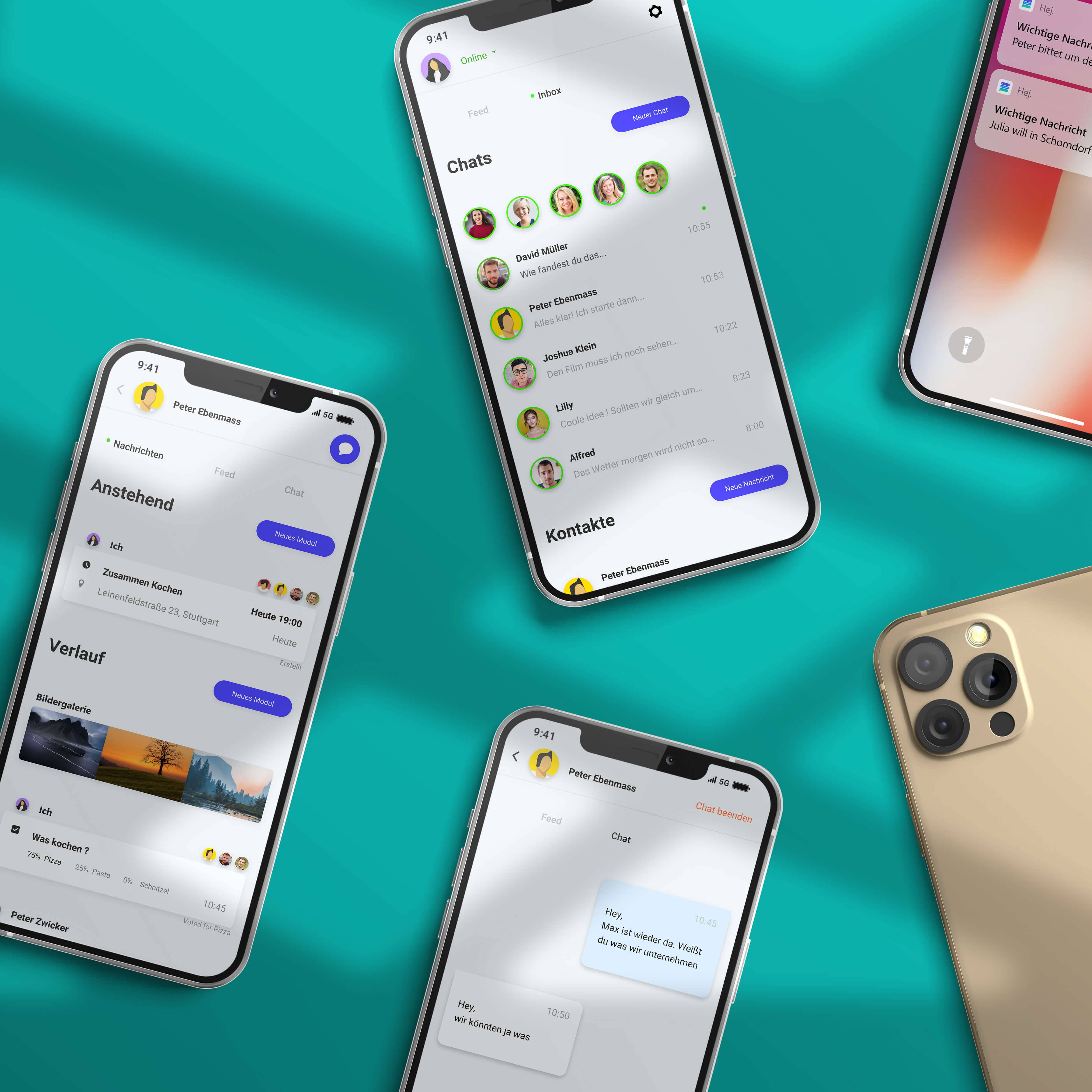 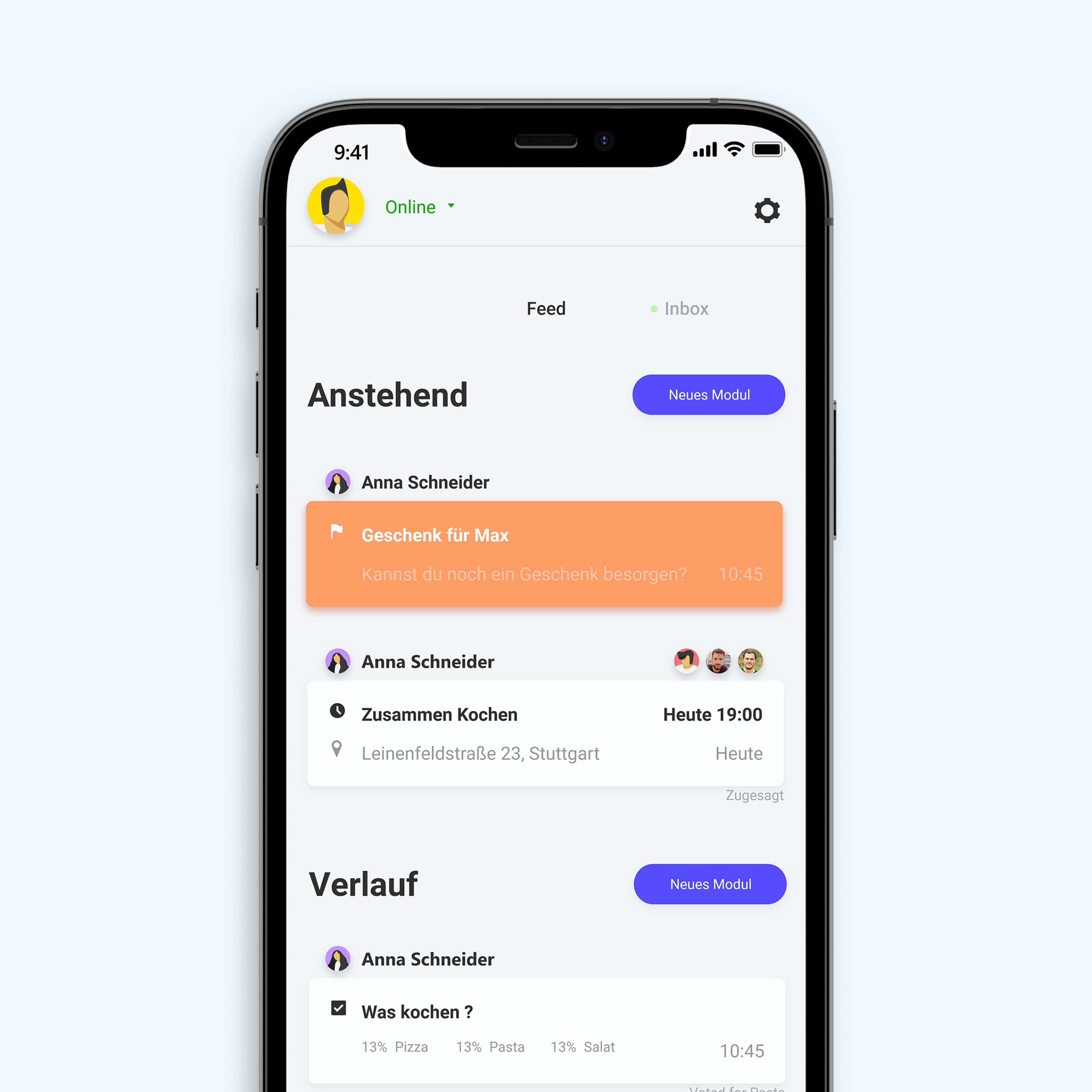 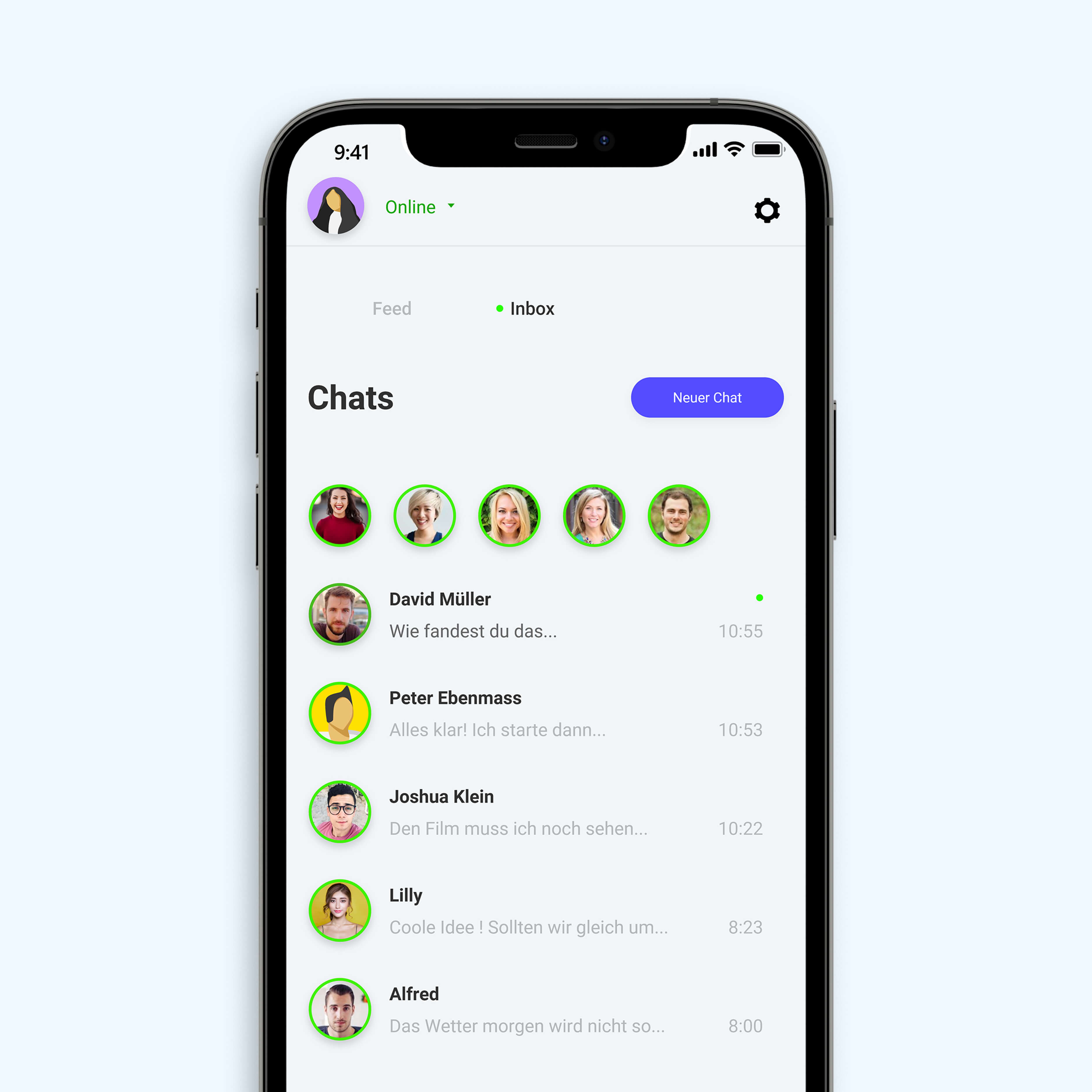 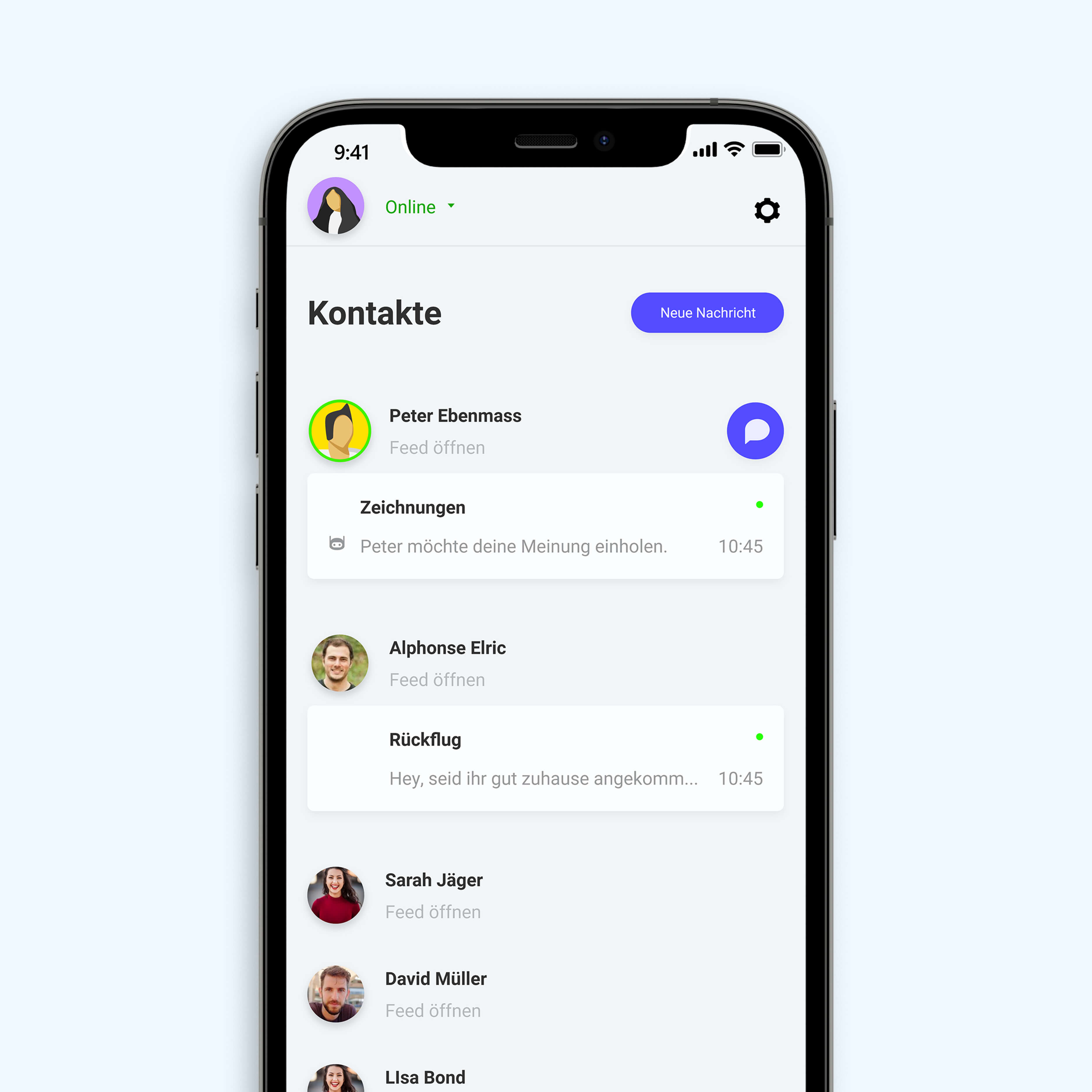 It was considered that chats should be opened just as quickly as with comparable products. On the one hand, these four main screens give a good overview, but on the other hand, they also provide simple drill-down options within conversation histories.

Likewise, there are three main functions that need to be explained in more detail to understand the exotic structure of the application. 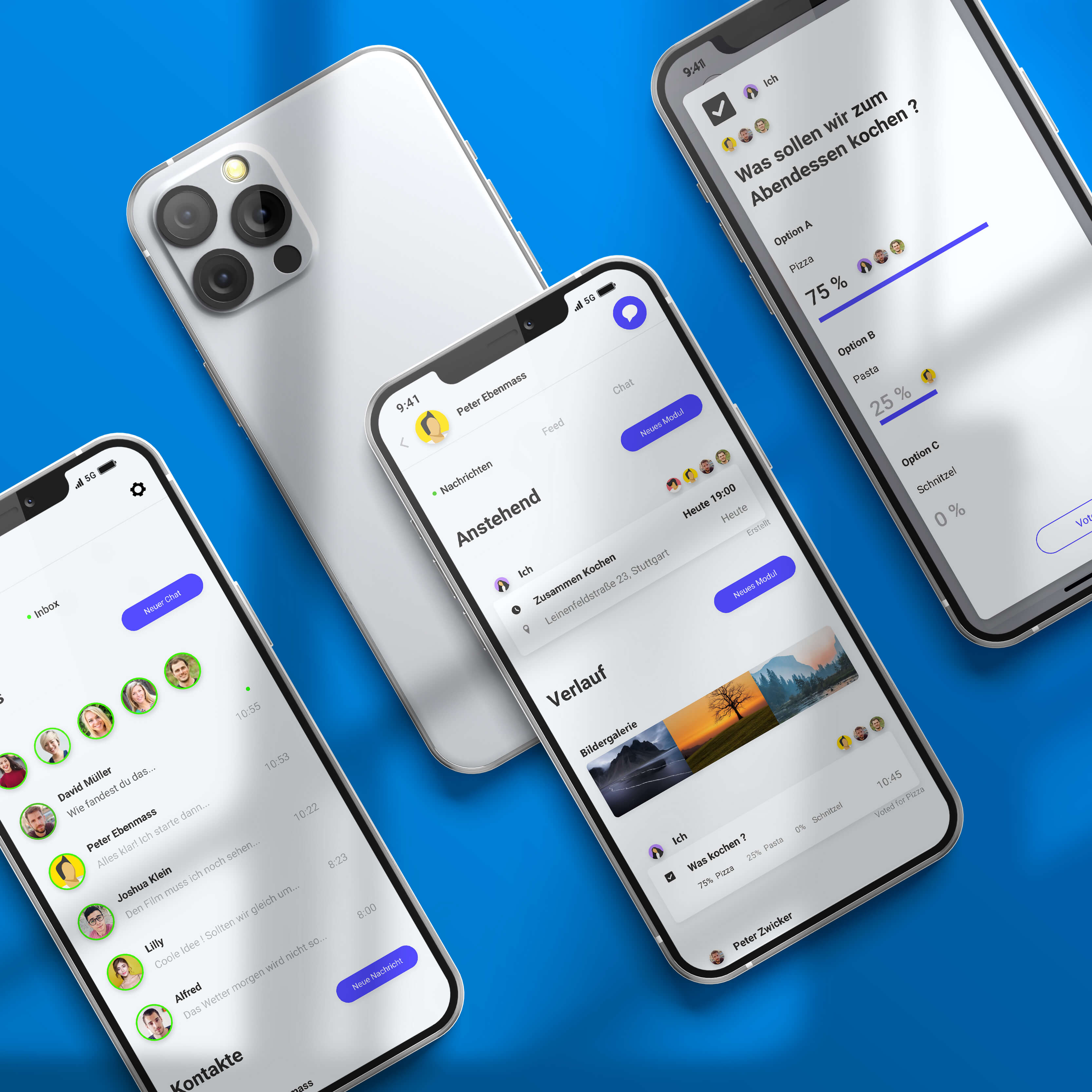 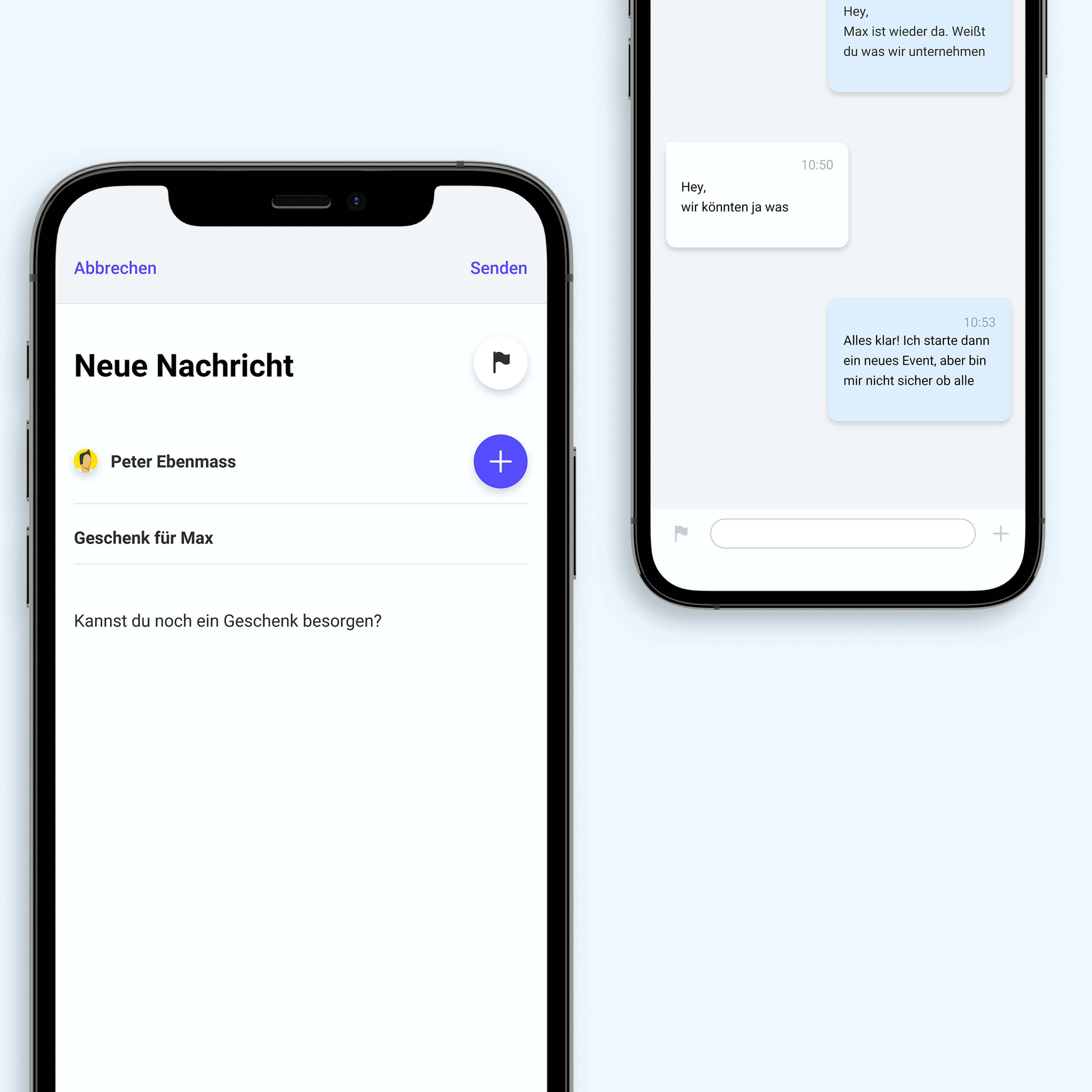 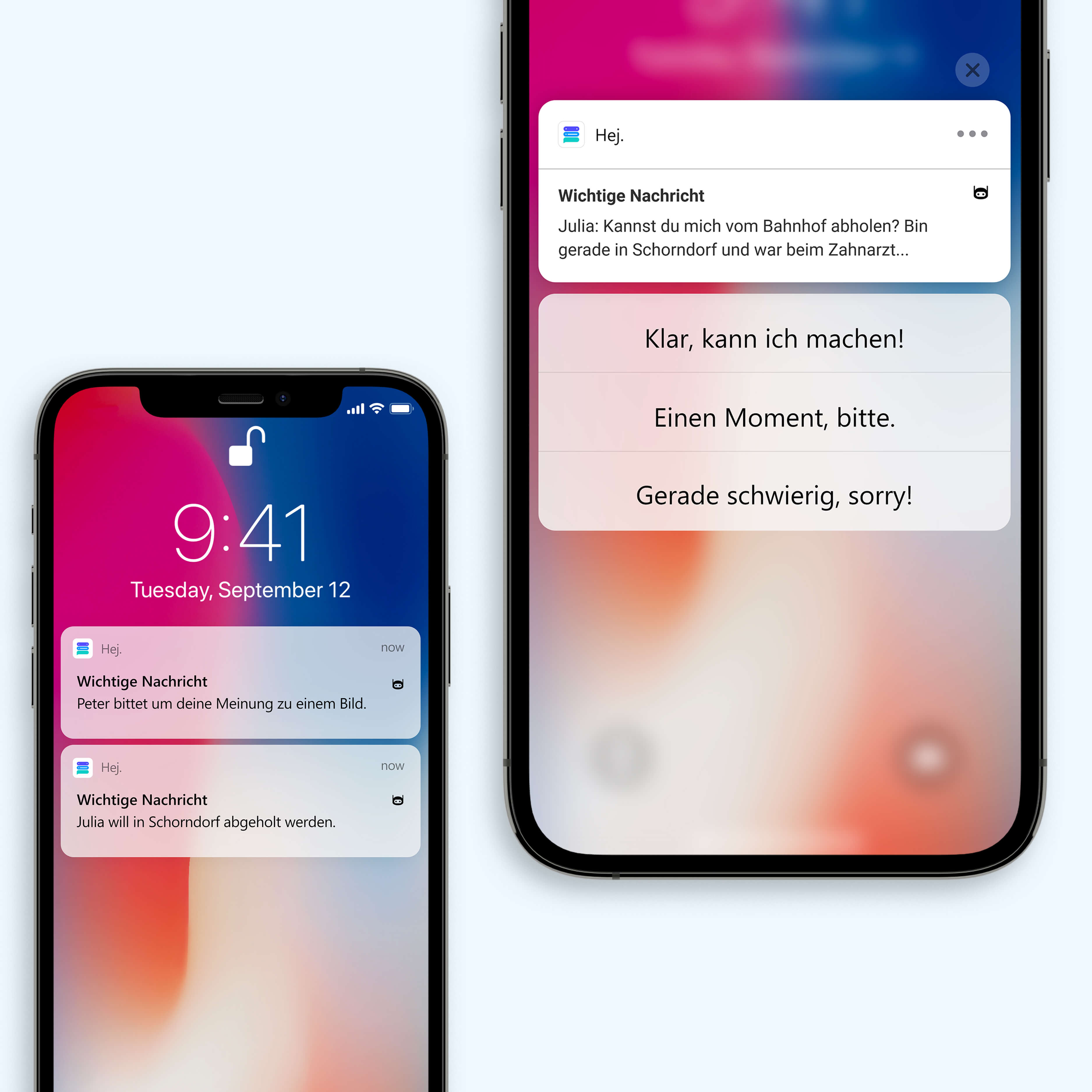 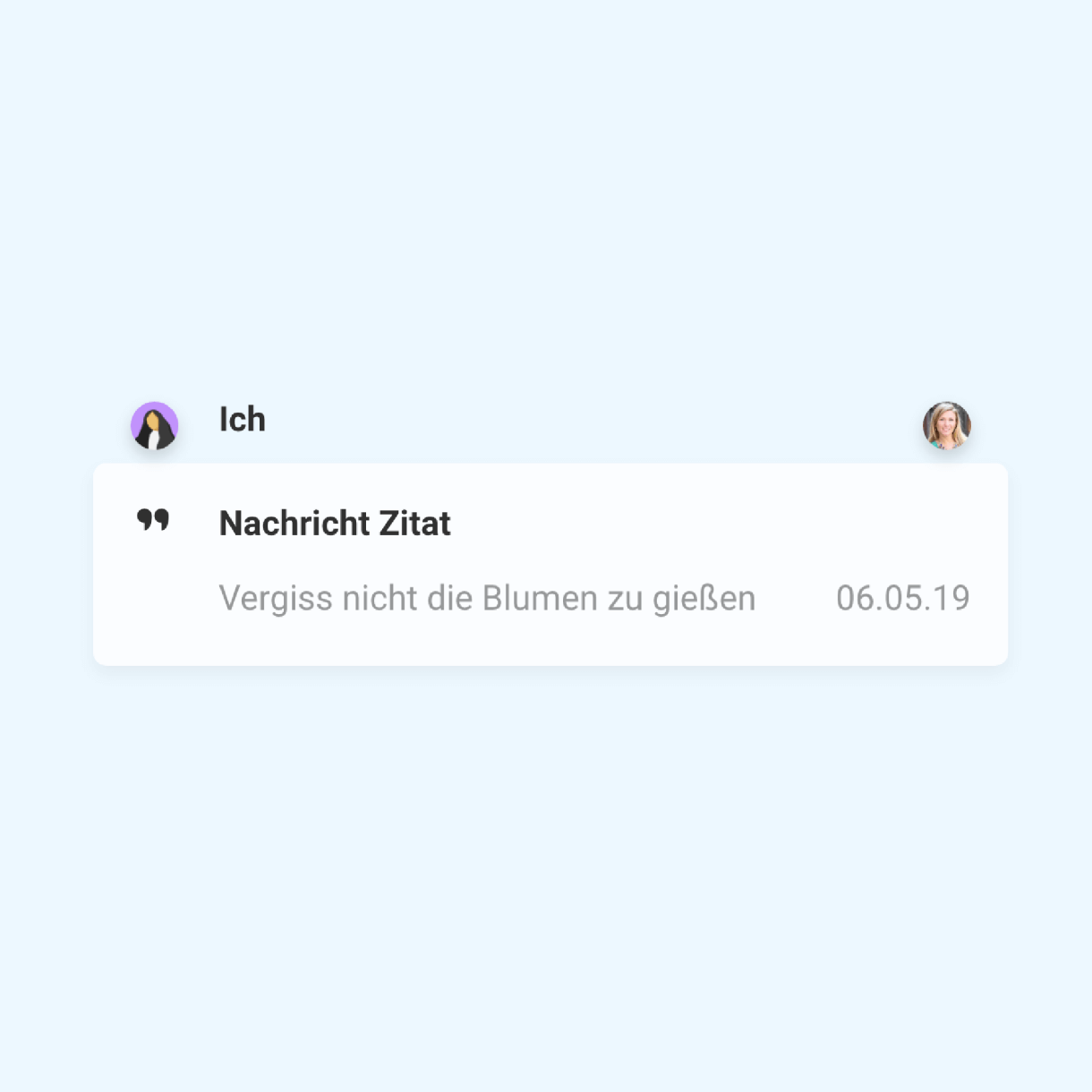 The quote module is the most flexible so far. If a mail or chat message seems important for later, you can still highlight the selected quote. This is primarily intended to give the user as much freedom as possible to prioritize content. 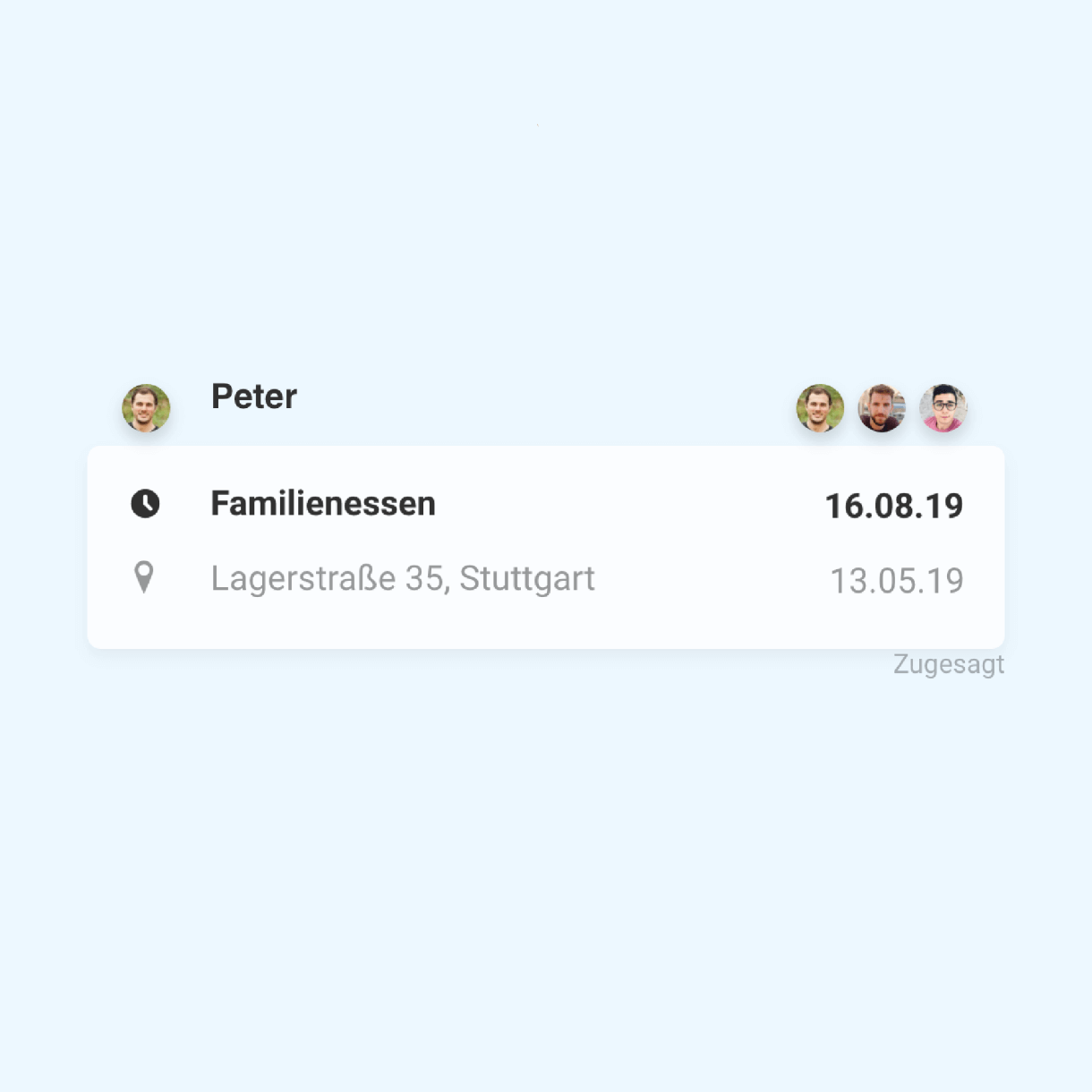 The event module is used to arrange a mutual interaction depending on time and place. This module is more likely to be used when planning is completed. According to interviews, this information is often not shared transparently and gets lost. 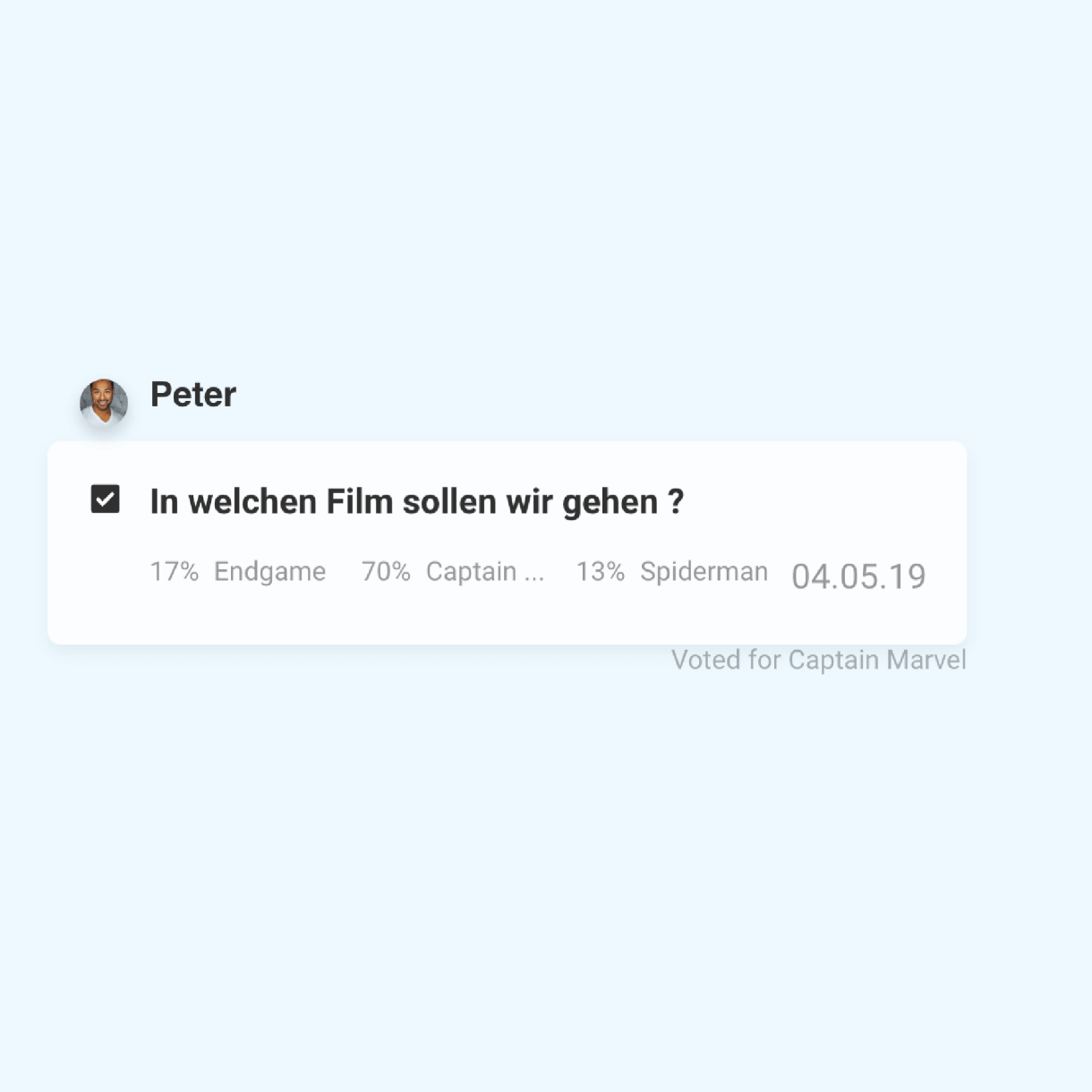 The poll module reduces and clarifies discussions, a big reason why chats can explode with the number of messages. Decisions become more understandable and stand out clearly. This module is more for planning in large groups.